Get a copy of the film the politicians & media don't want you to see! (order here)

Written, Produced and Directed by:
Jeannine Ross and Bruce Yarock 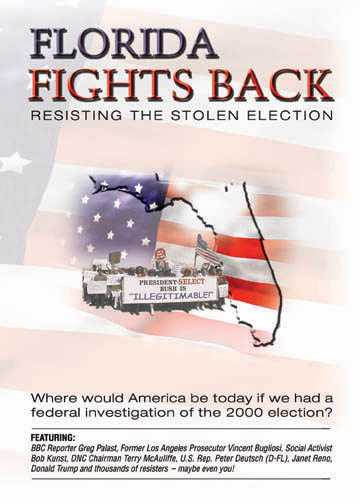 The film made by Floridians at Ground Zero

Where would America be today if we had a Federal Investigation of the 2000 election?

What really happened in Florida during the 2000 Presidential election? Grassroots filmmakers Jeannine Ross & Bruce Yarock tell you the whole story, not just the one you've seen on t.v. or in any other film about the election. From guerilla protest footage to confrontations with politicians to interviews with investigators, this film tells you the greatest story never told!

Go back to the scene of the crime to hear the evidence and watch the people's resistance.

. "Florida Fights Back" shows you how a crime was committed against Democracy in Florida in the year 2000 and how the politicians, from both sides, took the path of least resistance. Through all of this you will see the need to stand up, speak out and take action.

Watch us confront politicians like Peter Deutsch and Terry McAuliffe on their silence about the election.

This film is of, by and for the people - not the powerful!

Includes footage of the 2001 Academy Awards Protest and The 2001 Washington D.C. Voter March.

All original music by Bruce Yarock and David Thornburgh.

It's not about Left vs. Right Politics - It's about Right vs. Wrong

Were you a resister to the 2000 Election? If so you may be in this video!

To learn more about Greg Palast go to : www.gregpalast.com

To learn more about Bob Kunst go to: www.hillarynow.com or www.kunstforgov.com